The dress is challenging the suit as the ultimate power outfit

Well-respected female leaders in Norway dress in a traditionally feminine way. This may change the way we perceive feminine signs and symbols, according to researchers.
Eivor Mæland
eivor@kilden.forskningsradet.no
28 January 2016 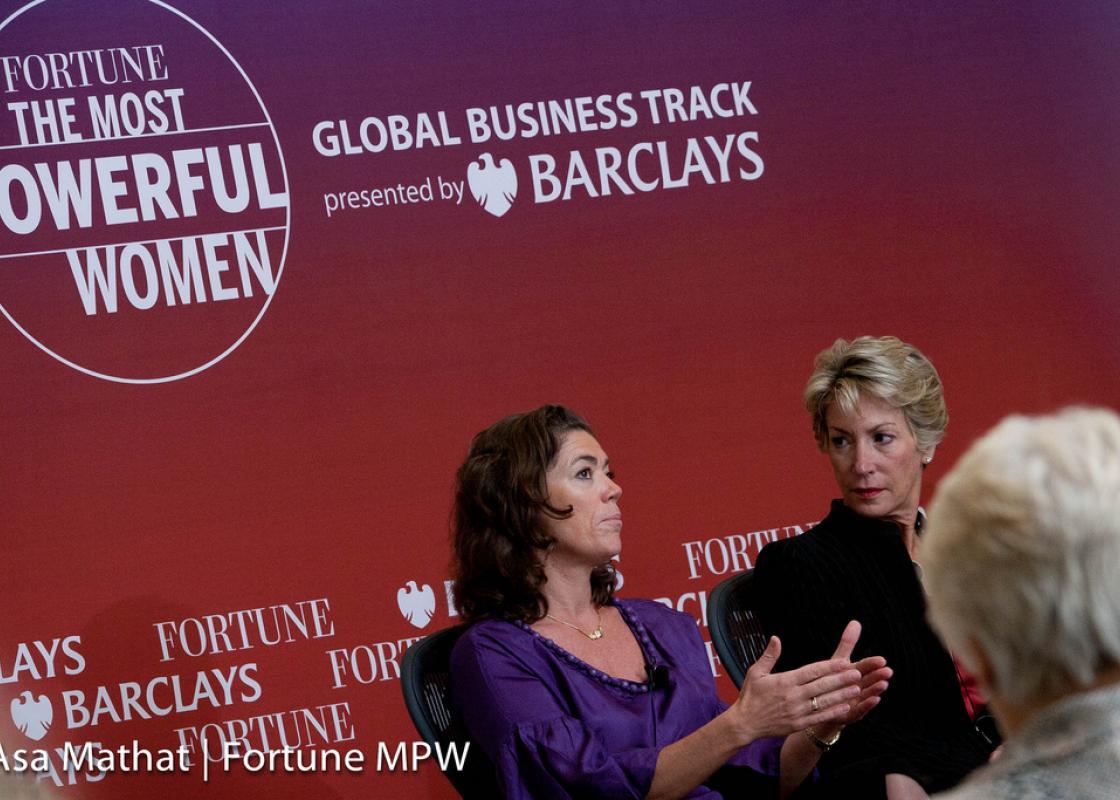 Photo of Kristin Skogen Lund, leader of The Confederation of Norwegian Enterprise, from a panel discussion on gender quota in California in 2011. (Foto: Fortune Live Media/Flickr)
More about
Masculinity
More about
Work
More about
Gender roles
More about
Business and economy

Kristin Skogen Lund is the leader of the Confederation of Norwegian Enterprise (NHO). She is a well-respected figure of power. She is often photographed wearing colourful dresses, jewelleries, earrings, or other typically feminine symbols and signs.

Traditionally we often imagine a man in suit when we think of a leader. Is it possible that Skogen Lund and other female leaders may challenge the male suit and what it symbolises? And is it possible to challenge the persistent link between masculinity and authority?

These questions have been raised by Professors Agnes Bolsø at NTNU Norwegian University of Science and Technology and Wencke Mühleisen, affiliated with Centre for Gender Research at the University of Oslo.

“The knee-jerk reaction which automatically makes us put more trust in expressions of masculine rather than in feminine authority seems to lose ground,” says Bolsø.

The researchers have analysed photographs of three female Norwegian leaders from politics and the private enterprise in an article published in the last issue of the Norwegian Journal of Gender Research.

In addition to Skogen Lund, they have examined photos of former Minister of Climate and Environment Tine Sundtoft and Civil Engineer Margareth Øvrum, who is a member of the board of Statoil.

Politics and the private enterprise are fields of power in which women to a high degree have had to adjust their style of clothing to the masculine dress code, according to the researchers.

“In organisations, authority is traditionally associated with masculinity. This is particularly challenging for women with power who are expected to have personal authority,” says Bolsø.

The researchers have not carried out a representative analysis of how female leaders dress, but they’ve identified three theoretical tropes in order to discuss pictures of powerful women.

In the discussion of the pictures of Kristin Skogen Lund, they use the term “feminising to power”.

One of the photos shows Skogen Lund with arranged hair, earrings, and a dress, with timeless upper class feminine appearance. Another picture shows her with her hair down and a broad smile while looking straight into the camera, wearing a red blouse with low neckline.

According to the researchers, the last picture appears more down-to-earth. They think the fact that a well-respected leader like Skogen Lund is portrayed in stereotypical feminine manners may contribute to a change in what we associate with a feminine style of clothing.

The knee-jerk reaction which automatically makes us put more trust in expressions of masculine rather than in feminine authority seems to lose ground.

The second trope is called “passing to power”. This is described as dressing in a way that copies the style of the most powerful, for instance a female leader dressing in a feminine version of the masculine suit. Adapting to the style of the most powerful while simultaneously retaining some signs of femininity seems to be the most common style in pictures from corporate management contexts. One example from the research material is a photo of Statoil’s corporate management board.

In a group photo of Statoil’s corporate management board from 2014, we see Civil Engineer Margareth Øvrum as the only woman among men. She is wearing a suit or a skirt and jacket. The only woman in Statoil’s executive group is wearing the female version of a suit, but she also has long hair and a scarf rather than a tie. In this way she demonstrates signs of femininity, according to the researchers.

The researchers refer to the third trope as “cross-dressing to power”.

The only woman in Statoil’s executive group is wearing the female version of a suit, but she also has long hair and a scarf rather than a tie. In this way she demonstrates signs of femininity.

The cross-dresser, a term inspired by the butch figure from lesbian communities, shows no such symbols.

Examples of this third type can be found in photos of Conservative Party politician and former Minister of Climate and Environment Tine Sundtoft. In the pictures, she appears with short hair and large glasses, and in all the photos examined by the researchers, she wears suit jacket and a shirt. In the full-figure photos, she also wears suit trousers.

“The only typically masculine symbol which is missing from her appearance is the tie. Due to Sundtoft’s hair style, clothes and body posture, we think she’s a good example of what we’ve called cross-dressing to power,” say Mühleisen and Bolsø.

According to the researchers, the female cross-dresser is a relatively rare phenomenon in female leadership. This may have to do with a notion that the cross-dresser breaks with an expectation to include signs of femininity in their personal style such as long hair, jewelleries, or make-up.

See also: Media images of women are getting worse

The researchers have applied figures from sexual subcultures’ aesthetic universe – lesbian, gay, or other queer cultures – to analyse the various patterns they’ve examined.

“Since we’re interested in femininity and masculinity, it is precisely those who don’t easily adjust to the norm who pay most attention to this. Consequently, many of the terms we apply come from sexual subcultures,” says Bolsø.

The trope “feminising to power” is inspired by the femme figure from lesbian communities in the 50s, say the researchers. The femme figure refers to the feminine lesbian style. She could appear straight, but often with an excessive, sensual style.

The last strategy, “passing to power” by dressing up in one’s own personal version of the powerful men’s style, is a well-used strategy among people in colonised countries.

Authority in make-up and high heels

According to the researchers, women can express their authority by the use of both masculine and feminine aesthetics and symbolism in their clothing and accessories. Both feminising to power, passing to power, and cross-dressing to power are strategies that work.

According to Bolsø and Mühleisen, connecting feminine aesthetics and power, as seen in the photos of Kristin Skogen Lund, is the most radical of the three tropes.

It is radical because it breaks with the traditional symbolic link between femininity and subordination or passiveness. Classical feminine signs and symbols such as high heels, skirt, jewelleries, make-up, and earrings have become part of the image of power and authority. In the long run, this may alter gender symbolism.

Bolsø emphasises that changing the meaning of traditionally feminine and masculine symbols is a complicated and complex process.

“Women can’t just adopt a masculine symbol and men a feminine symbol and give them new meanings. Changing symbolic meanings is not a one-person business.”

Changing symbolic meanings is not a one-person business.

“Some might think that the terms masculine and feminine are so heavily charged that it is difficult to alter their connotations,” says Bolsø.

Nevertheless, the researchers claim that the symbolism related to femininity and masculinity is in constant change.

Women may also act as so-called masculine, or make use of signs and symbols commonly associated with masculinity.

“Most people will agree that masculinity has symbolic associations and modes of expression that are not necessarily related to particular genitals or specific bodies; rather, it is a symbolic and aesthetic measure that you and I can make use of, which is dissociated from the male body,” says Bolsø.

In western societies, women are free to wear a suit without facing any problems although the outfit is considered masculine. Or, she may wear trousers, which were considered so masculine hundred years ago that women were stigmatised if they wore them.

“Researchers have for a long time been preoccupied with masculinity’s prominent position as a marker or authority and power, as well as its aesthetic distribution. But by studying this we also risk reproducing the masculine significance within the hierarchies of power,” says Bolsø.

Not a study of how powerful women dress

“Why is it important to study and analyse powerful women’s style?”

“We haven’t studied powerful women’s style. We’ve discussed authority, masculinity, and femininity by examining some photos of women by way of example. This is a discussion of symbols. It is not our ambition to say anything about how powerful women actually dress.”

Yet this is exactly the subject of discussion among the businesswomen when Bolsø presents the research results.

“A discussion immediately arises among the women concerning how they actually dress and their experiences. Although my talk is about gender symbolism and authority, they associate this with what people actually do in practice.”

Bolsø has not given much thought to whether or not it’s important to study and analyse powerful women’s style of clothing.

“They all dress very differently, and their style is also characterised by the business they’re in, whether they’re dressed for important meetings, what kinds of meetings and so on. Such a study is a topic for an entirely different project altogether, which can be done in both interesting and important ways.” 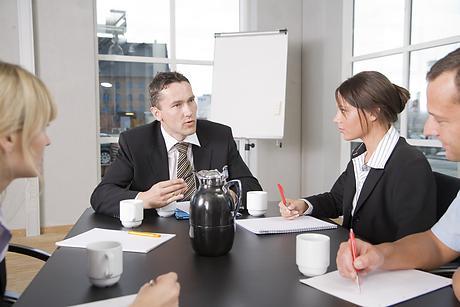 Gender differences in leadership a myth 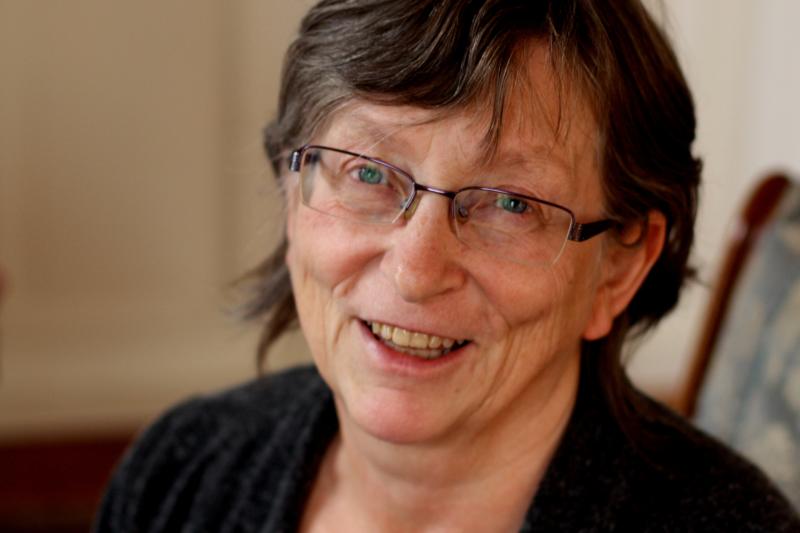 They left the kitchen and changed the Norwegian economy 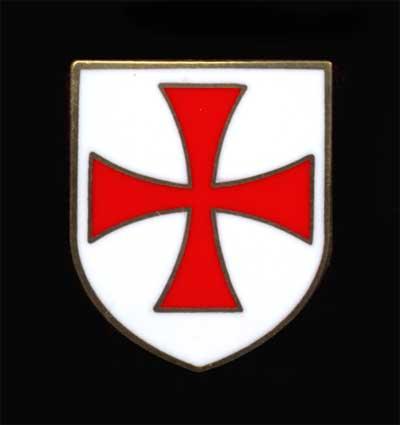