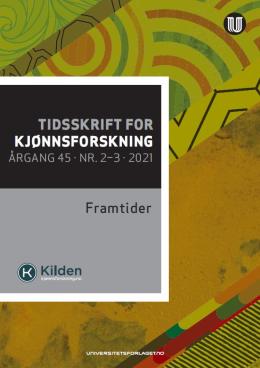 This years second issue is a double issue about "Futures". Read about intersectional stories about the future, science fiction through the lens of feminist theory and gender norms in social media marketing. You can also read about biotechnology, assisted reproduction and donor conception, and the issue of population politics in Turkey.

Intersectional Future Stories: Who Is Allowed to Dream of the Future?

Stories about the future are rooted in epistemological, structural and institutional frameworks. Those frameworks define the boundaries for how we envision a future and who has the opportunity to do so. This roundtable analyses the framework through a dialogical approach from an intersectional perspective, for an in-depth take on the conditions of stories about the future in western societies.

Visions of Augmented Reality in Popular Culture: Power and (Un)readable Identities When the World Becomes a Screen

“Itʼs Easy To See What Gender the Ad Is Meant for. Thereʼs No In-between”: A Study of Adolescentsʼ Interpretation of Gender in Social Media Marketing

This article examines how adolescents interpret gender in social media marketing. The article is based on focus group interviews with 54 young people between 15–22 years about their digital everyday life. The analysis draws upon Judith Butlerʼs theory on gender performativity and shows that young people interpret representations of gender in marketing on social media as an expression of narrow ideals with little variation in gendered expressions, while at the same time being critical of these representations. The critical distance suggests that the adolescents understand gendered representations in marketing as performative, rather than determined by nature. However, the adolescentsʼ critical attitudes towards gendered norms combined with their perception of also being influenced by them, indicate a negotiation where they are both shaped by the normative order of gender and sexuality that Butler terms the heterosexual matrix while also being able to criticise the expressions it promotes. We suggest that social media as a marketing arena, advertising as a genre, the adolescentsʼ context of interpretation during the study, their interpretation potential, as well as their regular media usage, contribute to this negotiation.

In this commentary to the recent amendments of the Norwegian Biotechnology Act we discuss the changes related to assisted reproduction. Our aim is to invite gender researchers to reflect on these changes, given the significance of reproduction for the cultural perceptions and social organization of gender. The Norwegian Biotechnology Act has since its inception been restrictive relative to the laws in neighboring countries. This changed in May 2020 when the Parliament, after years of discussion, voted in favor of e.g., egg donation, fertility treatment for single women, egg freezing without medical reasons, and access to early ultrasound examination and NIPT test (non-invasive pre-natal test) for all pregnant women. A prominent argument in the parliamentary debate was the call for Norway to be a modern society and in the frontline of technological developments with respect to biotechnology. Another line of argument concerned womenʼs individual rights, emphasizing that once new technologies are available, all women should have access to them. We identify a shift towards a more optimistic and less cautious approach to biotechnologies and, moreover, from governmental to individual responsibility. We end the commentary with questions regarding the gendered implications of such a shift.

In assessing how politicians generate population politics through parliamentary debates, I am interested in the discursive construction of such debates. Political debates are important contexts, influencing, and also being influenced by larger cultural processes drawing the boundaries of citizenship. This article carries out comparative and multi-method analyses of normative, religious and communicative dimensions of the population politics unfolding in the Turkish parliament. Through the analysis of parliamentary debates between 2008–2016 on the issue of population politics, I study how the ruling Justice and Development Party (AKP) addresses the population in order to stop the decline of fertility rates and promote higher fertility rates. I argue that the politicians of AKP affect public reasoning by circulating discourses such as slogans or public declarations while simultaneously postponing agendas for significant policy change. I further show that the oppositional parties’ debates in the parliament likewise enable political ideas to be disseminated and political discourses to be part of the public sentiments.

Based on fieldwork in California in 2018, this article explores how donor-conceived personsʼ knowledge of their own conception produces reconsiderations of the past, present, and future in a continuous dynamic. Through conversations with 19 Californian donor-conceived persons, I consider how knowledge of donor conception alters and is altered by temporalities and facilitates arguments for policy change in the US American fertility industry. The article is especially inspired by Walter Benjaminʼs concept of the «meeting» between past and present and contextualizes his ideas in a highly topical area of tension between individual and state. The article thus invites understandings of how new reproductive technologies produce and transform temporalities that may alter the future of these very technologies.

Kilden is organized as an
independent department within
the Research Council of Norway.