Intersectionality and other perspectives on diversity 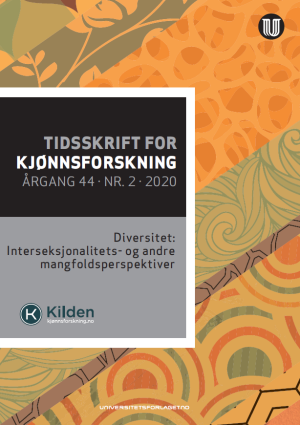 The second issue in 2020 deals with the many ways to understand diversity – theoretically, methodologically and empirically. You can read about the term intersectionality, both from a historical perspective and applied to new research about boys and young men, and also queer migrants in Norway. In addition, you can read about the public discourses concerning fertility and immigration in Norway and about one of the short stories by the Norwegian writer, Cora Sandel, and its relation to sexuality, power and historical materialsm.

During the last 30 years, intersectionality has become a central perspective in gender studies, and has travelled across disciplinary and national contexts. This has led to intense debates about the content and methodological implications of the perspective. In a Nordic context, one of these debates has addressed whether intersectionality, through a focus on structures, categories and processes of categorization, entraps analyses in narrow and deterministic theoretical frames. This debate is the point of departure of this article. We thus argue for an understanding of intersectionality that emphasizes three methodological principles: the sensitizing, the process-centered, and the multi-dimensional principle. Such an understanding is in our view well-suited for analyzing interacting, complex and mutually constitutive processes of social differentiation. After outlining this point, we illustrate the potential through an analysis of including and excluding intersectionality in Scandinavian welfare societies with a focus on public debates about ethnic minority men and their subject positions and everyday life.

Scholarly debates about boys have noted the interplay between gender and other dimensions of inequality. This article explores the foundations for intersectional analysis of boys’ problems. Based on existing concerns about intersectional perspectives being prone to static analyses (of binary categories «constituting» each other) this article suggests supplementing an intersectional perspective with C. Wright Mills’ (1959) emphasis on the dynamic relationship between history and biography. The resulting combination may be termed processual intersectionality and invites investigation of the ways in which dimensions of inequality interact in historical and biographical processes. The potential merit of processual intersectionality as a perspective is illustrated by a contextualized account of boys’ problems in everyday life and over the life course.

Discrimination and Social Exclusion of Queer Migrants in Norway

This article presents findings from a study of living conditions among queer migrants in Norway. Taking intersectionality as our starting point, we analyse 251 respondents’ experiences of discrimination and social marginalisation. Findings show that more than half of the respondents reported experiences with negative treatment or comments due to gender identity or sexual orientation, and even more due to their migrant background. Approximately 1 in 3 respondents reported exclusion from ethnic minority communities due to sexual orientation or gender identity, and 1 in 5 found that queer communities are excluding migrants. These forms of social marginalisation and exclusion, tied to double minority status, have not previously been analysed systematically. Surveys based on self-selected samples, like the one we have conducted here, represent an important supplement to qualitative research on the one hand, and representative studies on the other hand. Based on the empirical analyses, we discuss how future research may combine intersectional perspectives that are sensitive to context, with quantitative methods that have traditionally been geared towards generalisable findings.

In this article, I examine the characteristics of recent public discourses on reproduction, fertility and family planning in Norway. As background to the analysis, I refer to my previous article Two-child families or a full dozen? Immigrant birth rates in Norwegian public discourse [Tobarnskull møter stua full? Innvandreres fødselstall i norsk offentlig diskurs], published in Tidsskrift for kjønnsforskning in 2009. The public discourses analysed are understood as expressions of and as a commentary on current Norwegian population policies, and, as such, also as a form of indirect regulation and response to the population’s reproductive behavior. Equality, both in terms of gender equality and equality between various reproductive actors, is central to the analysis. The analysis shows that the last decade’s rapid drop in birth rates has resulted in an increased pressure on the population, and in particular on women, to have more babies to ensure the survival of the Norwegian nation and the welfare state. At the same the climate crisis has given added impetus to the voices challenging the idea of a national fertility problem.

– Who Killed Germaine?
Sexuality and power in «The Art of Murder» by Cora Sandel

The paper takes off with a question raised during a lecture in 1996. What did Cora Sandel mean by naming the main characters in the short story «The Art of Murder» after European superpowers which recently had been involved in conflict and war? The characters are named Francine and Germaine. The paper suggests a new interpretation of «The Art of Murder» in the light of the earlier version, «Viewpoints». It is important that the story takes place in the aftermath of the Russian Revolution and World War I. It is also important that Cora Sandel published the first version of the short story in a newspaper situated on the political left. The question «Who killed Germaine?» finds its answer in the interplay between Sandel’s texts and biography. By a sidelong glance, the question is also linked to the novel Who Killed My Father (2019) by Édouard Louis.