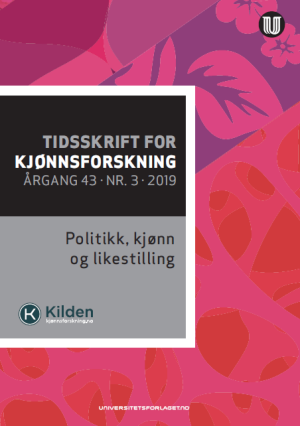 The topic of the third issue in 2019 is Politics and gender equality. You can read about Norwegian political parties and their policies when it comes to gender balance, how the concept of gender equality works within the context of each party and their integration policies, and how each representative views his or her role as a politician and who they claim to represent.

Local party branches and non-partisan lists play an important gatekeeper role when they select candidates for local elections. The parties thus influence the gender distribution among the elected councillors. In this article, we ask whether local party branches and lists regard low female representation as a democratic problem. We examine whether they regard gender balance as a democratic value, and whether they work to achieve gender balance when they select candidates for local elections. Using data from a survey of party branches in 43 Norwegian municipalities, which had low female representation and participated in a project to place women and politics on the local agenda, we focus on similarities and differences between the political parties. As in previous studies with more representative samples, our findings confirm that parties differ: parties to the right – in this case the Progress Party – are least concerned with gender balance. This leaves us with a why-question: Is this just a matter of ideology and attitudes, or is it (also) about practical and concrete circumstances that limit what is possible?

Campaigns for more women during local elections in Norway are the theme of this article. There has never been gender balance in local councils as a national average, but there are substantial variations between the local communities. Election researchers have taken an extensive interest in exploring how political parties and voters influence the composition of the persons elected as local representatives, but they have been less concerned with women’s collective mobilization. Women have, however, a tradition of campaigning for more women since the introduction of general suffrage in 1913. This article addresses such campaigns after a brief description of the history of women’s inclusion in local assemblies. The particularities of the Norwegian local election legislation are explained, before a discussion on how the political parties and the voters have applied the election regulations strategically with respect to promoting or restraining the election of female candidates. The main issue, however, is displaying campaigns and initiatives to elect more women, starting with the first campaign in 1925 to the systematic, national campaigns since 1967. The argument is that these campaigns illustrate the role of women’s movements and women’s collective mobilization in relation to local elections, give a broader gender-political contextualization of the election strategies of political parties and voters, and offer interesting empirical material to discussions of the political meaning of gender/women.

Women and men in municipal politics – Who do they claim to represent and how influential do they perceive themselves to be?

In this article, we examine how the concept of gender equality (‘likestilling’) is used and works within the context of integration policy as it is presented in Norwegian party programs from the periods of 2013-2017 and 2017-2021. We identify three ways that gender equality is used, namely (1) gender equality as value, (2) as right and duty, and (3) as a measure for integration. Through the analysis of problem representations within these three framings, across the party programs, the article shows how gender equality presented as a value runs the risk of blurring social inequalities, and how equality as ‘right and duty’ forms a limited understanding of how immigrants can achieve equality. Based on the empirical analysis, the article argues for the necessity of defining and specifying the socio-political significance of the term equality, rather than assuming that the word represents a universal value.

‘I try to appear as butch as I can’. Insult, subjection and resistance among LGBTIQ people

This article discusses what impact harassment, threats, and violence that are perceived to be homophobic, have on how LGBTIQ people constitute themselves and how they relate to the social surroundings. The article is based on indepth interviews with LGBTIQ-people who have experienced harassment, threats or violence because of their sexual orientation and/or gender identity. In the analysis, I draw on Judith Butler’s theory of performativity and Didier Eribon’s work on insult. I suggest that insult, and the way LGBTIQ people perform heteronormative gender to avoid insult, can be understood as subjection within a heteronormative, social order. Several of the participants in the study express that homophobic hate crime indirectly targets all LGBTIQ-people, and they emphasize the importance of reporting such incidents to the police. Insult can therefore also be understood as a foundation for resistance against homophobia and heteronormativity. I argue that the legal term ‘hate crime’ can be understood both as a result of, and a point of departure for, LGBTIQ identity politics and citizenship.

The representation of women and parliamentarian positions

The increase in representation of women constitutes the biggest change in the social composition of the Norwegian parliament – Stortinget – after the Second World War. In this article we analyze these women’s career trajectories within the parliamentary decision-making system: To what extent have they succeeded in gaining formal power in the Storting after the 1960’s – in the presidency and in party leadership? More precisely we investigate how the presence of women has developed since 1964 in three arenas within the parliament: the presidency, the parliamentary committees and in the leadership of the party groups.