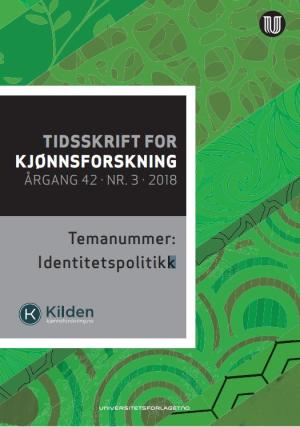 The third issue in 2018 focuses on the theme identity politics. Read three articles and a book essay about this relevant and controversial field.

#metoo in Norway: A substantial, but incomplete norm change against sexual harassment

This article addresses the potential for norm change against sexual harassment after #metoo. It argues that the campaign’s broad impact in Norway was largely caused by the media’s initial focus on sexual harassment as a workplace problem, where the discourse resonated with both existing legislation and a political consensus. However, the antagonistic debate on #metoo in the public sphere showed that the question is far more complicated than the dominant media discourse suggested. The article uses a theoretical framework from Critical Discourse Analysis (CDA) to explain the #metoo campaign’s impact and a theory of political anomie to explain the challenges that remain for a substantial norm change. It is based on an analysis of media texts in national and regional newspapers that mentioned the word «metoo» between 15 October, 2017, and 15 February, 2018, a total of 2054 texts. As the analysis was conducted while the #metoo debate was still ongoing, the article cannot assess the long-term effects of the campaign. However, it illustrates important limitations that should be taken into consideration in further studies of #metoo and the struggle against sexual harassment in Norway.

Queer young people’s identity work: SKAM after homotolerance addresses how young queer-identified people discuss and express concerns about identity in the context of «homotolerant» Norwegian society. The article is based on focus group conversations with young queer-identified people, and on season three of the NRK production SKAM (Andem 2016). These empirical sites show young people’s elaborate conceptual repertoire, which they use to articulate and imagine alternate gender identities and sexual identities. Both SKAM and our focus groups illustrate that the stigma of male femininity produces strong affective responses, and is challenging for young men who consider identifying as homosexual. Furthermore, the norm of homotolerance in Norwegian public culture insists on a decoupling of sexual orientation and gender expression. Heteronormative gender norms remain intact, however, leading to a desire for the possibility of a homonormative same sex identity that does not trouble heteronormative gender norms. Meanwhile, queer activist youth are resisting the accommodation into homonormativity through insisting on new identities which require further discussion of the meanings of gender and sexuality.

What can strong feelings mean for the possibility of political dialogue between people from different backgrounds? In this article, the author uses an event to discuss different theories about the public sphere that involve the intersection between private and public. She uses Nancy Fraser’s critical development of Habermas’ theory, but finds that Fraser only to a small extent writes about emotions and emotional involvement. Thus, Martha Nussbaum’s understanding of feelings and classical rhetoric is also used to discuss the event.The purpose of the article is to discuss individuals’ offended feelings in the public sphere in light of theory influenced by feminism.