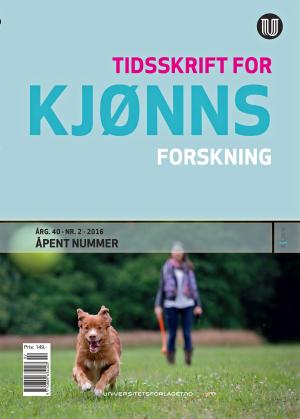 This issue of the Journal for Gender Research offers three articles within the framework of an open issue. Thematically, they range as wide as you can possibly imagine: A critical discussion of indigenous methodology, via insane male sex offenders, to dog training.

The Unacceptable Men. Masculinity and Insane Sex Offenders in Norway from 1895 to 1940

Sexual crimes from 1895 to 1940 were the subject of considerable public debate and attention in Norway. During this period a stronger women’s movement emerged, which contributed to strengthening women and children’s rights. Studies that have discussed this period have largely focused on the role of women and the development of femininity, but what about men and understandings related to masculinity? This article focuses on men and contemporary masculinity norms, based on patient casebooks of male insane sex offenders admitted to Kriminalasylet and Reitgjerdet Asylum. The article discusses mainly the patients’ relationships to work and family, understandings relating to homosexuality, and the relevance of the concept of "unmanliness".

Men, Women, and Dogs. The Gendered Aspects of Dog Training