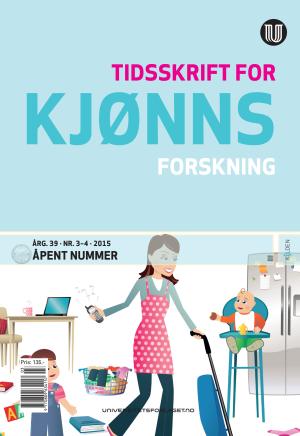 Female dress codes for power, the au pair scheme, as well as couples' reflections on paid and unpaid domestic work, are among the topics you can read about in our latest issue.

Since the au pair scheme was ratified in 1971, Norway has gone from being a country sending out au pairs to being a recipient country. Today, au pairs do not travel between countries in the West, but travel from the global south to Europe, and in a far higher number than previously. Most people see au pair arrangements as employee relationships. Social scientists understand au pairs mainly as part of a feminized migration flow. Norwegian authorities, however, maintain that the au pair scheme revolves around cultural exchange. I show that the notion of cultural exchange on the political level involves some advantages. One can reject an ongoing debate on servanthood. One avoids linking the au pair scheme to gendered migration policy, and avoids the possibility that the au pair phenomenon destabilizes a well-established self-understanding as genuinely focused on gender equality for all. The article discusses how the disparity between the understanding of the Norwegian authorities and other understandings is possible.

Women in Photographs – Dressed for Power

This is a study of dress and dress codes, related to the capacity clothes have to enhance authority, as well as to reduce it. Cultural and symbolic structures of meaning related to gender and authority are explored, using as examples photos of Norwegian female top leaders. Authority and masculinity are often seen as connoted, while femininity holds a more ambivalent position related to formal and legitimate power. The authors discuss how masculinity and femininity are negotiated in images of female leaders, who, due to their position have to signal authority and executive power. In particular, they address possible shifts and transgressions in the connotations of femininity. In their analysis and discussion, the authors apply three figurations known from research on subcultural sexual aesthetics: passing to power, crossdressing to power and feminizing to power.

Truismes (1996) is the French writer Marie Darrieussecq’s first novel. It is a story of a young woman who gradually is transformed into a sow. This article shows how Darrieussecq uses the classical literary theme of metamorphosis to discuss gender and feminist issues in our contemporary western world. The transformation theme enables her to discuss not only our gaze upon the female body but also the language we use to talk about it, and eventually challenge the borders between the categories animal/human, grotesque/normal, woman/man.

Last names amongst young Norwegians in 2014

In 1979, changes were made to the Norwegian name law, for the first time giving men and women the same legal rights to change or keep their last names in marriage. Eighty percent of Norwegian women married between 1980 and 2002 reported taking their husband’s last name. Six percent of Norwegian men took their wifeʼs last name, both these figures according to statistics from 2003. In this article, choices and reasons of men and women born in 1980 are explored through a qualitative questionnaire. In 2014, last name choices were still largely left to women, and something few men thought of. A few women and all the men saw the keeping of their own last names as obvious, meaning that women had a wider range of possibilities to choose from than men. However, most often women’s choices were results of active consideration, meaning that women’s ownership to their last names was taken less for granted than men’s.

The paper takes as its starting point a principal idea that movement between the known and unknown may bring about novel comprehension and meaning. Through productive processes, we create and recreate ourselves and the world surrounding us. We may encounter the known and the unknown through literary narratives. Inspired by narrative research, empirical studies from the preschool field and Paul Ricoeur's critical hermeneutics, we explore how encounters between two narrative texts may be connected to the shaping of children’s subjectivity. In the fairy tale of Little Red Riding Hood (Grimm & Grimm 2002) and in the picture book Gitte og gråulvene [Gitte and the gray wolves] (Lindenbaum 2001), the encounters with wolves of two different red-hooded girls are described. By relating the texts to each other, we show how literature presented in the preschool may create different opportunities and understandings of gender and identity.