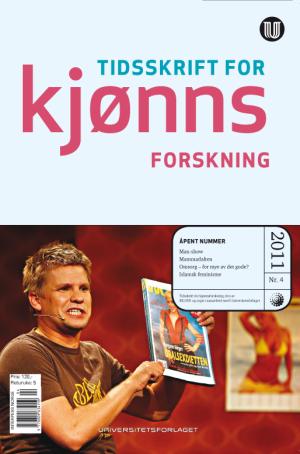 The reflexive nostalgia of masculinity in TV 2 Zebra’s Manshow

This article deals with representations of masculinities in the Norwegian media and popular culture in the 2000s. Fredrik Langeland examines the ways in which the Norwegian TV program Manshow, which was aired on the commercial channel TV2 Zebra from 2006 to 2009, provides an opportunity to analyze discursive conflicts concerning masculinity in Norwegian society. Manshow was a humorous TV program with an explicit male chauvinistic profile and an emphasis on heterosexual male bonding. The program was launched at the same time as some people were claiming that Norwegian men were now being marginalized in a feminized society. Through a close reading of the opening of the show’s first episode in 2006, he highlights how Manshow creates a space where men have free access to enjoyment such as drinking beer and objectifying women. This is made possible by the use of irony, or what he characterizes as the reflexive nostalgia of masculinity.

"My husband – a mama’s boy". Gender, power and normality in the discourse of "mama’s boy"

The present paper combines post-structural cultural analysis with structural sociological analy-sis, thus intending to understand the phenomenon of «momma’s boy» (or mama’s boy) in heterosexual relationships. The "momma’s boy" as a figure is seen as problematic from a woman’s perspective, usually in combination with the figure of an intrusive mother-in-law. Based on qualitative in-depth readings of personal narratives, advice columns and Internet discussions of the momma’s boy problem, as well as men and masculinity studies and gender equality research, we discuss how gendered borders and performances citations become particularly acute and intense, and conclude that representations of the mamma’s boy express lim-ited opportunities for men, at the same time as the strong cultural images of momma’s boy become "carriers" of power discourses.

Too much of a good thing? – women’s involvement in men’s health and illness

International studies show that women become both practically and emotionally involved in their partner’s health. According to our findings, these expectations regarding involvement are more an acquired and innately embodied sense of duty. There are also emotions that become transformed into rules that many women strive to follow. Moreover, these rules are difficult to defy if they consider them to be meaningful. However, our study also reveals that women who ascribe to these expectations risk becoming exhausted and may even develop health problems of their own. Therefore, while it may be comforting for men to know that their health will be well taken care of by their spouses, in this article we will discuss the finding that this form of dependency may also make these caregiving women feel that their own lives are being intruded upon and controlled. If involvement deprives men of assuming responsibility for their own health, this could unfortunately result in their behaving in ways that undermine their own health. Seen from a long-term perspective, serious consequences resulting from the above men-tioned interaction could arise, leading to a negative sense of well-being shared by both spouses.

New Challenges to Islamic Feminism: The Many Faces of Women’s Activism in Sudan and Iran