In Manndalen, a village in the county of Troms in the north of Norway, Laestadianism is a strong influence in the community. How does this affect those in the community who do not belong to this religious movement? Why is home baptism still practised , while Christmas trees – which were previously rejected – are now on their way in to every living room? Lisa Vangen has conducted fieldwork and interviews in the village.
beret@kilden.forskningsradet.no
16 December 2005 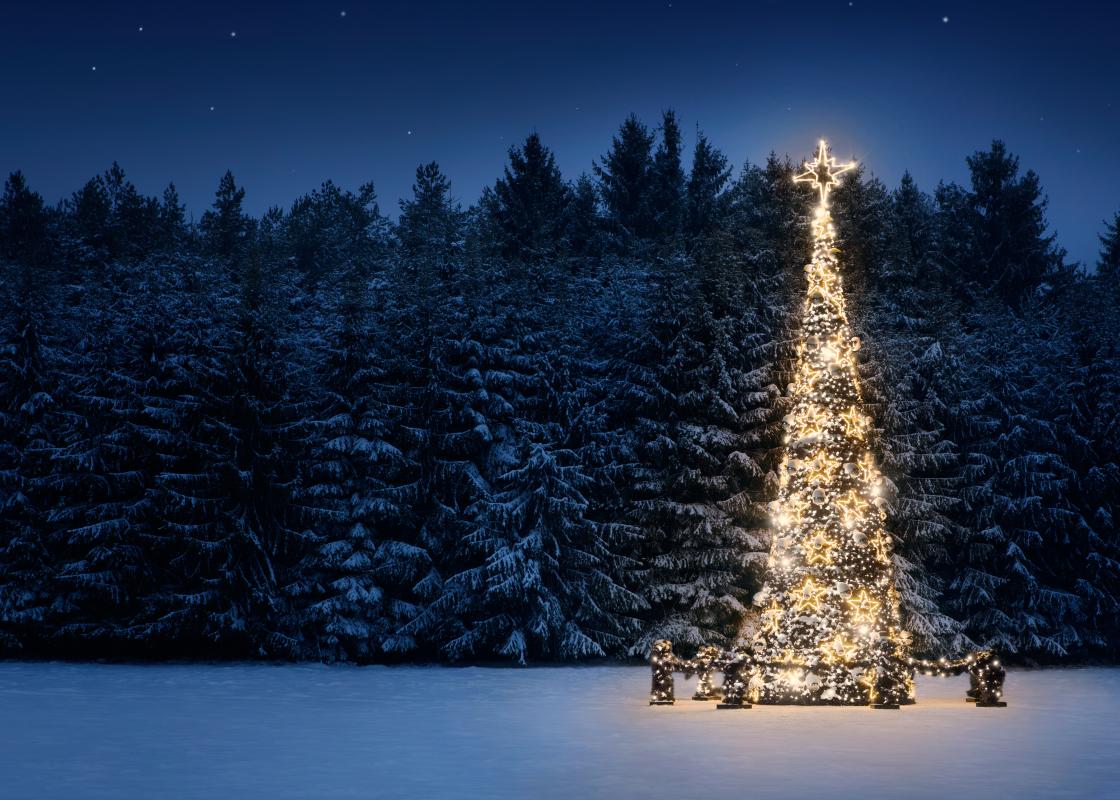 Christmas trees were rejected by Laestadians because they were seen as a pagan custom, but this tradition is on its way out. (Illustration photo: iStockphoto)
More about
Faith and religion

Laestadianism is a Christian revival movement that started one hundred and fifty years ago. It has clearly pietistic elements, but remains within the Church of Norway. The movement was started by the priest Lars Levi Laestadius, for whom faith was a sacred passion that only those that had received salvation could pass on to others. The revival spread from Karesuando in Sweden to the whole of the Northern Cap (the northern parts of Sweden, Norway and Finland), Russia, the Baltic countries and the USA.

– However, disagreement over questions of teaching have, over time, led to many splits within the movement, explains Vangen. Several researchers have come to conclude that there is a great deal of local variation in Laestadianism’s form, and that this variation should be mapped out by doing empirical research.

This is what Lisa Vangen has done, by taking the place where she grew up, Manndalen in Kåfjord local authority in North Troms, and studying it. Of the 800-900 people in the village, she estimates that about 50 define themselves as Laestadians. In Manndalen, there is a Laestadian prayer house built by community volunteers after World War II. It is owned by the Laestadians, but is also used for church events.

Those who both are and are not

Vangen conducted fieldwork in the district for two years. She has participated in Laestadian meetings, talked to people in the area and conducted in-depth interviews with a variety of informants, who are mostly non-Laestadians.

– There has been a lot of research on Laestadianism and the various aspects of it in northern Norway. There has, however, been much less focus on how non-Laestadians relate to the movement and how they are influenced by it, says Vangen. Her Master’s thesis contributes to correcting this. One question she poses is whether Laestadian values and practices are maintained and passed on by non-Laestadians. The answer is both yes and no.

In her thesis, Lisa Vangen looks at a number of Laestadian values, norms and practices. Some of them are in danger of dying out, while others are thriving. One custom that is still practiced by both Laestadians and non-Laestadians is home christening or infant baptism. Vangen found that, in 2003, there were 17 church christenings, and of these 7 of the infants had been christened at home or at hospital beforehand.

– One couple had decided to christen their two week old baby at home, and the previous day they had gone to ask an older Laestadian male relative whether he could christen the child – which he did. Vangen connects this form of christening to the fact that most of the Laestadians in Manndalen belong to the so-called Lyngen movement. They regard christening as necessary for salvation, which in other words means that the children remain wretched if they are not christened in God’s name. If one who is unchristened dies, he or she will wind-up “in damnation”, they say. Therefore, children should be christened soon after birth.

The couple at whose home Vangen attended the christening were not themselves Laestadians. Why do they therefore uphold a Laestadian practice?

– One important explanation is their consideration and respect for older relatives who are Laestadians, says Vangen. – They know that it is important for the child’s grandparents or great-grandparents, and it’s also something they themselves think is okay. This is about tradition and the special status that is bestowed upon elderly relatives. Age is central to the idea of respect in this community. The older someone is the more respect they should receive.

The father of the christened child says: “…if it means something for my wife and those close to her, then I have no problem accepting it. I have no personal feelings on the matter”. While the child’s mother, who is also not a Laestadian, says: “…For me this isn’t so much about the content of the christening, whether one believes or not that christening is important for the child’s salvation, but it is about consideration and respect for those who think it is important. It’s also about participating in traditions and feeling that one belongs, and also to introduce my child into the local culture where we live.”

Nevertheless, there can be some belief involved, even for those who don’t consider themselves Laestadian.

– Some people point out that they look upon home christening as a kind of safeguard for a possible life after death for the child. For what if something happened and the child had not been christened? This thought is deeply ingrained in many people. And between themselves people talk a lot about christening; on whether new babies have or have not been christened, explains Lisa Vangen.

Later on, a christening takes place in church. – In Manndalen church christening is something “everybody” practices. The christening ritual is institutionalised. For my informants christening is a given. However, to be christened at home is also considered to be a little rarer and unique, Vangen points out.

So you don’t interpret the practice of home christening as a legitimising of Laestadianism? – No, not among the non-Laestadians who choose to do this. However, one of the interviewees said that she did not want a home christening, because it would appear Laestadian. Implicitly, this is not how she wants to be seen.

Another example of the continuation of tradition is the view of women at prayer meetings. In the Laestadian movement women have no place at the pulpit.

– They are demoted to the pews, says Vangen. This decision is based upon a principle within the Bible that women are subordinate to men in all things.

– And one would think that such an arrangement would function as a symbol dividing the Laestadians and the non-Laestadians in the community. However, it does not work like that, Vangen asserts.

– I have not met anyone in the community who disagrees with the notion that women should not preach at Laestadian congregations. They see women priests, bishops and others who preach on TV, but that is something that is done in other places. It is not an issue locally.

"There is other work for them to do in the church", says one of Vangen's non-Laestadian informants. And if a female priest comes to the community this will invite new problems.

– She would most likely not gain access to the prayer house, says the researcher.

Lisa Vangen does not perceive that the women feel themselves to be second class or inferior.

– They see themselves as different from men, but equal, she underlines.And some of the rules that Laestadian women previously followed, like not dressing up or having long hair, are not valid as they were before. Neither is it compulsory for women to wear a headscarf in public any longer.

– This custom is about to die out.The very oldest women still wear a headscarf, and at Laestadian meetings it still seems normal for women to cover their heads. In the community, however, the attitude is that this really has little to do with faith, but has more to do with old women's ways of dressing.

Rules associated with marriage have led to conflicts and splits locally in recent years.– One faction within Lyngen Laestadianism believes that divorce and remarriage should be allowed, while another wants to maintain the ban against it, the researcher explains.

Among non-Laestadians in the community both divorce and remarriage are accepted, Vangen says. So in this case they don't take tradition into consideration in the same way as they do with home christening.

– No, and this is related to the cost. Not allowing divorce involves too great a personal cost for those involved.

Christmas trees and TV – Paganist and the work of the Devil

Another tradition that is on its way out is the Laestadian absence of Christmas trees. – Laestadians’ rejection of Christmas trees has received much attention. From a non-Laestadian point of view this has almost been a symbol of what it means to be a Laestadian. "Think – they don't even have Christmas trees", relates Vangen. Christmas trees were rejected because they were seen as a pagan custom, but Vangen also connects this to their resistance to unnecessary "decoration and luxury".

– To some people not having a Christmas tree is still a given. However, this is a practice that is increasingly difficult to maintain when non-Laestadians in the community do have a tree in their living room. Among non-Laestadians, as far as I know, this is not even up for discussion.

The same thing applies to television. –Television is seen, from a Laestadian perspective, as the Devil's work and sinful. However, today it seems as though this attitude has softened, Vangen explains. – Today, most people do have televisions.

Non-Laestadians, a buffer against the outside world

– Laestadians have had and still have many rules today. Nevertheless, they are part of modern society and change as it changes. My impression is that non-Laestadians in local communities where there are many Laestadians function as a buffer between them and the secular outside world. When values are attended to and maintained by non-Laestadians it seems that inertia in the process of change is greater and the cultural clutter heavier, says Vangen. –Values and practices that non-Laestadians no longer attach meaning to are more difficult for the faithful to maintain.

Vangen emphasizes that non-Laestadians do not use religion to legitimize their choices and conduct.

– Nevertheless, where values and conduct have gone through a successful relegitimisation process, from being connected to sin to being connected to new modes of explanation they are maintained and continued. They become institutions.

– Projects of identity are not only about the individual but about kinship, traditions, the surroundings and the place where one lives, Vangen underlines. – Identity is about feelings and personal experiences. If you only look at it from categories such as religious/non-religious, Sami/Norwegian, then the nuances and the substance of what identity is about disappear.

In much of the previous research Laestadianism is connected with being Sami. -However, seeing Sami and Norwegian as contrasting one another is considered by many as problematic, says Lisa Vangen. – They don't feel comfortable with either the Norwegian or the Sami identity category.

See also: Our Mother in heaven

More about
Faith and religion