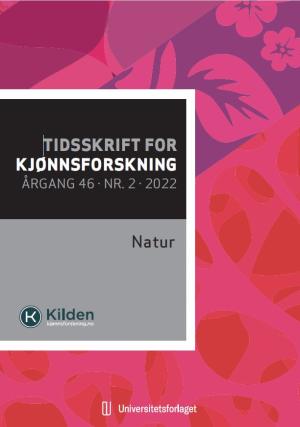 This year's second issue is a special issue about nature. Questions concerning nature has always been important within feminist theory and gender studies, and nature as a scientific, political, cultural, and ethical concept is gaining increasing attention. The articles in this issue deal with the necessity of thinking with, about or completely unthink the concept of nature, whether it is in the field of eco feminism, death positivity, queer feminist politics or in the Norwegian TV series State of Happiness.

This article explores how the North American movement Death Positivity uses conceptions of the natural in death to illustrate and counteract inequality. Death is often called the great equalizer, but its impact differs depending on who we are in the world. A central contributor to the movement, The Order of the Good Death criticizes the lack of approaches to death as a material and cultural phenomenon. It presents death and nature as interlinked and connects with ecofeminist theorist Val Plumwoodʼs (1991) conception of the discontinuity problem – the anthropocentric understanding of the human as opposed to nature. Death positivity considers death an ally, not an enemy, to being human in relation to nature. In their understanding of death positivity, death and nature are interlinked concepts, in contrast to death practices that separate the human from nature through embalming, burial vaults and depletion of natural resources in an era where they are increasingly disappearing. The movement represents a practice of Donna Harawayʼs ideas of compost, a material/figurative understanding of the human in the world alongside others. Harawayʼs Staying with the Trouble (2016) invites feminist discussion of human materiality without using it to justify or support the inequality that arises from self-indulgent anthropocentrism – an idea the death positive movement pulls down to the Earth and into the ground.

“Nature” Is Also a Word: On Taking Nature Seriously in Feminist Theory

As a result of the «material turn», feminismʼs traditionally circumspect attitude to the concept of nature has been replaced by one of curiosity and enthusiasm. It is claimed that nature is no longer to be seen as cultureʼs passive, unitary and deterministic counterpart but rather as dynamic, differential, and unpredictable – something always exceeding the frameworks we impose on it through language, science, and technique. In this article, I claim that this (re)turn to nature is based on a fallacy. Taking my cue from the motto found in ordinary language philosophy, «leading words back from their metaphysical to their everyday meaning», I show that there is nothing concealed behind our linguistic practices that corresponds to the general term «nature» to which properties such as «passive», «active», «unitary» or «differential» can be meaningfully ascribed. When we thus unthink, instead of rethinking, the metaphysical notion of nature, and thereby also the so-called nature/culture opposition, we can look afresh at the classics of modern feminist theory – from Simone de Beauvoir to Judith Butler – and get a clearer view of the heterogeneity of the issues that these texts place on the agenda, yet which tends to be occluded by the nature/culture conceptual apparatus. I conclude with a brief reflection on the implications my position might have for ecofeminism in theory and practice.

Anne Conway and the Revitalization of Nature: Conwayʼs Environmental Ethics as an Alternative to Aristotle and Spinoza

By Fredrik Nilsen and Trine Antonsen

In the ecofeminist classic The Death of Nature: Women, Ecology and the Scientific Revolution (1980), Carolyn Merchant highlights the way Anne Conway (1631–79) criticizes the dominant mechanistic view of nature by claiming that everything in nature is filled with life. In Conwayʼs work Principles of the most Ancient and Modern Philosophy (1690), we find a view of nature where the inorganic nature, such as earth, stones, and mountains, has life and therefore needs to be treated in a good way. We try to show that Conwayʼs position falls between that of Aristotle and Spinoza in that she, on the one hand, agrees with Spinoza that the whole of nature has life but, on the other hand, operates, as Aristotle, with a hierarchy in the creation between humans, animals, plants, and stones. Conway has thus been significant in the emergence of an environmental ethic that differs from both duty ethics and utilitarianism, and at the same time represents an alternative for the dominant dualistic view of nature. Nevertheless, it is contentious how ecofeminism should relate to Conwayʼs hierarchical thinking, since environmental philosophy in general, and ecofeminism in particular, have been concerned with the breaking away from anthropocentric premises.

Fuel and Feminism: Oil, Women, and the Urbanization of Nature in State of Happiness

The first season of the television series State of Happiness (2018) depicts the advent of the Norwegian petroleum industry between 1969 and 1972. To contextualize the chain of events that preceded and followed the discovery of oil in the North Sea, but also for dramatic purposes, the TV series foregrounds the lives of two young women, which imbues the seriesʼ narrative of growth with feminist tropes. Enquiring into the character arcs of the gendered figures in the seriesʼ historicization of oil, this article problematizes how State of Happiness alludes to the emancipation of Norwegian women to legitimize the urbanization of the North Sea and local farmlands for a contemporary audience in the heyday of energy transitions.

Nature has long been an ambivalent entity for many queer/trans people. We are by our very presence variously called unnatural or at odds with, or a crime against, nature. It was therefore refreshing to be able to retaliate against nature when the Xenofeminist manifesto (2015) declared that «if nature is unjust, change nature!». For yes, we must problematize the queer and transphobesʼ understanding of what natural means. But the notion of nature as docile today speaks to a different context. In times of unprecedented human impact on the state of the planet, it is time to ask for alternatives to alterations in nature as a goal. I will argue in this commentary that queer feminist change must be brought about by simultaneously increasing our sensitivity to nature, its socio-sexual systems, and its conditioning of human life forms. In other words, we must nature this change.