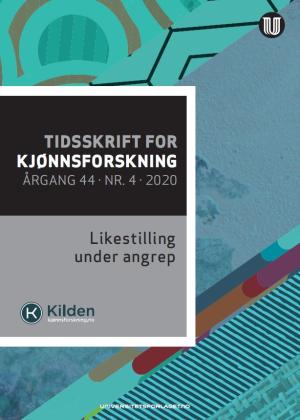 The topic of the fourth issue in 2020 is gender equality under attack. Read about violence in close relationships in Russia and Poland, and about violence as a form of opposition to gender equality, as seen through the growing violence against women online. You can also read a discussion of the two concepts transhumanism and posthumanism, related to equality and diversity.

This article addresses violence in close relationships in Russia and Poland, two countries that have experienced a marked national conservative turn over the last years. The article shows how this issue constitutes one of the links in a chain of themes that forms part of a wider national conservative discourse. The political authorities in these two countries acknowledge that violence against women is a problem but place more emphasis on the need to protect the family, the distinctive national character and sovereignty. They are being challenged by a cosmopolitical-liberal opposition that enjoys wide popular support on the issue of violence in close relationships. The article raises the issue of how far the national conservatives can pursue their use of violence in close relationships as part of their narrative about threats against the nation.

The article problematises violence as a form of opposition to gender equality and aims to contribute to theory development. At the core of the analysis is the growing violence against women and feminists online, its intensification and escalating brutality. The article analyses three cases with feminist demands for gender equality and the violent opposition they encounter online. It argues that, although online violence ostensibly appears as individual events, it constitutes a continuum of violence against women and girls. The analysis shows that online violence destabilises the borders and boundaries between private/public and online/offline; these become impossible to establish and maintain. The article concludes that although the online sphere certainly constitutes yet another place for violence against women, it is at the same time a platform from which changes in the gender order are possible. Here, in line with the destabilisation of online/offline, the prevention of online violence must be linked to the prevention of other forms of violence and be considered as part of the growing continuity of violence against women. A feminist understanding of violence, which extends the expression of violence beyond physical, individual, and intentional, is particularly appropriate for analysing online violence.

Posthumanist Possibilities and Transhumanist Dead Ends in the Anthropocene

Transhumanism and posthumanism are both entry points for discussing the boundaries between technology, nature and the human in a time where humans affect the planet in fundamental ways. The human impact is so great that a new geological era has been suggested: the Anthropocene. In this article, we explain transhumanism and posthumanism as different positions in new debates about the role and responsibility of the human in the Anthropocene. We argue that there are fundamental ethical, theoretical and political differences between them. Transhumanism is about the radical improvement of mankind, while posthumanism is concerned with the human in relation to the non-human, such as technology, climate and animals. With an emphasis on feminist philosophy of science and feminist ecology, we argue that posthumanism is a crucial thinking tool for problematizing, understanding and challenging the traditional position and role of the human in the Anthropocene age. In contrast to transhumanism, which represents a persistent human-centered position, posthumanism, and especially feminist posthumanism, is a theoretical position that looks beyond the notion of a universal human being, and maintains a less hierarchical approach to how diverse species, bodies, environments and technologies relate to and interact with each other.