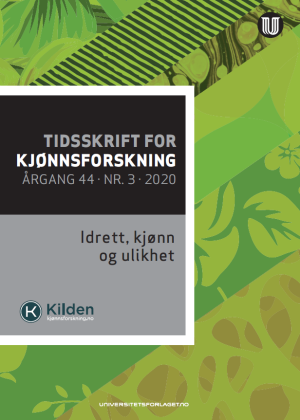 The topic of the third issue in 2020 is sports, gender and inequality. Read about how imaginaries of gender, race and the body come to expression in «gender testing» in elite sports, and about how Muslim women boxers experience conflicting pressures from family and their boxing coaches. You can also read about why teenage girls stop participating in organized sports earlier than boys, and how the portrayal of women’s football as secondary influences how girls playing football themselves perceive it.

“The Average Woman”, Gender Testing and the White Gaze: Racialised Imaginaries of Gender in Elite Sports

In this article I draw attention to how imaginaries of gender, race and the body come to expression in «gender testing» in elite sports. With a critical perspective on the history of gender testing, I explore how scientific understandings of gender have been expressed in standards and practices for testing and evaluating gender. Through a focus on the presentation of Caster Semenya as a «problem» I show how the regulations maintain a binary understanding of gender, and place, not just of Caster Semenya, but of women elite athletes more generally, in a paradoxical position. I suggest that when some women’s bodies are identified as suspicious and subjected to scientific gender tests, it is an expression of how elite women athletes are held accountable for «the average woman’s» embodied femininity. I question the scientific nature of gender testing, and explore how historically constituted imaginaries of gender, race and bodies are articulated through a white normative gaze. I focus on an aspect of gender testing that has not received significant attention in Norwegian gender studies; whose imaginaries of gender and race underlie gender testing, and how these imaginaries contribute to the framing of Caster Semenya as «the big problem in sports».

Against All Odds
Muslim women boxers’ negotiations of identity while caught between freedom, belonging and confinement'

By Anne Tjønndal and Jorid Hovden

The purpose of this paper is to illustrate how Muslim women boxers negotiate their identity in situations where they continually manage resistance and conflict, because they choose to be boxers. By choosing an identity as a boxer they challenge dominant norms of how young Muslim women should act in public spaces. Through their embodiment of their faith, they challenge how female boxers are expected to behave in the boxing ring. Consequently, they experience stigmatization and exclusion both from their families and from male leaders in the boxing environment. The article is based on life story interviews with two young Norwegian Muslim women boxers with immigrant backgrounds. The theoretical framing derives on figuration sociology and post-colonial theory. The narratives of the young boxers demonstrate how they experience boxing as a space of freedom, mastery of skills, recognition and possibilities to transcend gendered boundaries, leading to their refusal to give up boxing, even if this means that they have to live with relentless conflict and an existential doubt if being a boxer is compatible with being a respectable Muslim woman.

Gendered Exercise as an Expression of Gendered Meaning?
Exercise contexts and motives among Norwegian youths 13–18 years,2010–2018

By Mads Skauge and Kolbjørn Rafoss

This study examines differences in boys’ and girls’ exercise motives and participation in sports clubs, fitness gyms and self-organized exercise. Previous research reports that youth’s exercise activities are heading towards what modernity theorists refer to as individualization. These shifts have to a small degree been studied from a gender perspective. The starting point of the paper is the nationally representative Norwegian Youth Surveys 2010–2018 with respondents in the age span 13–18 years. The results reveal a health-oriented, individualized and gendered exercise field, especially evident for girls exercising outside of the organized sports context. Better health is the most important exercise motive, and more so for girls than boys. Not committing to timely regular exercise is the most important reason for dropout from club-organized sports, especially for older teenage girls. While competition is a more widespread exercise motive with older age among boys, it decreases with age for girls. A higher proportion of boys than girls participated in club sports throughout the period 2010–2018, whereas the opposite is the case for commercial fitness gym exercise. Drawing on Giddens’ concept of reflexivity and Bourdieu’s notion of gendered habitus, we discuss how gender differences in motives can be explained as an expression of gendered identity projects and embodied dispositions, helping us understand gender inequality in exercise organization.

Gendered Opportunities in Football
What does the metanarrative of women’s football mean for teenage girls’ sports project?

The topic of this article is sport and gender. We focus on football – which today is the most popular sport among both girls and boys in Norway. At the same time, it is highly gendered at the elite level. Women’s football is often portrayed as secondary compared to men’s football. This is a key ingredient in the “metanarrative” of women’s football in Western culture. At the level of associations and clubs, however, different measures are implemented to promote girls’ motivation and prevent dropout. The aim of this article is to examine what “sports project” young girls consider available to them– in this particular sports context. For this purpose, we analyze interviews with players on two teams for girls aged 14–15 years, conducted as part of a fieldwork study. We argue that football still represents a particularly gendered context that restricts what girls think football can be for them, which we refer to as their “sports project”. We find that the metanarrative of women’s football plays a significant part here. Even if girls see the metanarrative as both misrepresentative and unfair, it is also incorporated and a part of them, and visible in their assessment of what good football is and how they talk about gendered inequalities in their own club.