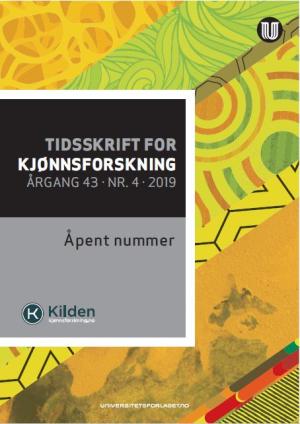 The fourth and last issue in 2019 is an open issue and contains five scientific articles. Read about gender equality in ICT work and within peace engagement in Norwegian foreign policy. You can also read about transgender individuals and their relation to their body and sexuality, about how men are presented in male-oriented Norwegian cookbooks and how the American artist and poet Dorothea Tanning provided a woman’s perspective on eroticism in art.

The body and the fantasies about it
The commonality of transgender

Interviews with transgender individuals are analyzed in this article. All the informants quoted in the text have at one point considered medical corrections of their body. The informants are conscious of what kind of body they have and how they might imagine it different. In the article, the interstice between the actual body and the fantasy about the body is analyzed, through interviews about sex and sexuality. The analytic question is: What do the informants say about their bodies, and what do they make of the body; mentally, in the imaginary and in sexual fantasies? Concerning the possible tensions between ideas about one’s body and the body itself, the argument is that the differences between cis-gendered and transgendered individuals are of no principal character.

“Do we really need more women in ICT?”
Discursive negotiations about gender equality in ICT

Of meals and males

The article examines how men, their food practices, and preferences are presented in male-oriented Norwegian cookbooks published after World War II. My starting point is that these can be understood not only as recipes for dishes but also for men. The representation of the gastronomic man in these books has changed dramatically since he first appeared in 1945. I have characterized the various gastronomic men in chronological order as the mismatched, the soft, the manly, and the multifaceted. The underlying rationales for giving men an active role in the kitchen have changed over the years, from the logic of necessity, through obligation and now desire. The male-oriented cookbooks consistently portray men as different from women. The early books operated with a distinction between men and women with a basis in both competence and taste. Gradually, this distinction has eroded, and a richer image has emerged, in which the man is put in relation to the family, women, the children, and his buddies. Cooking skills have changed from being a primitive necessity in emergencies to becoming a status-enhancing, masculine skill.

Norway has a strong national self-image as a gender-equal and peace-promoting nation. In this article, we explore the intersection between gender equality and peace engagement in Norwegian foreign policy. While systematic integration of gender equality norms and policies has been on the agenda in Norwegian development cooperation for decades, the integration of such norms and policies in Norway’s peace engagement is of recent date. In our study we have been particularly interested in examining how Norwegian diplomats balance experiences, values and interests when gender equality norms and practice are pursued in Norway’s international peace engagement. We find that gender equality is regarded as a central Norwegian value, which is ‘natural’ to promote in peace engagement. It has also become an important currency in the competition for status, power and influence in international politics. However, too strong a focus on normative and value-based ideals and ambitions can be risky, according to diplomats. There is a concern that it can easily damage Norway’s image as a neutral facilitator of peace processes.

The American artist and poet Dorothea Tanning (1910–2012) was inspired by surrealism and explored her unconscious through her art and poetry. She belongs to the group of women who early provided a woman’s perspective on eroticism in art. She has made a number of self-representations in different art genres and describes herself in interviews. Tanning defines her identity by ruptures and change, while I ask if her self-representations give me enough elements to describe an identity. She was an outstanding artist battling with the difficult role of a woman in the Arts and was at the same time violently against the label surrealist. She did not accept the concept of the “woman artist” as she was convinced that gender had nothing to do with quality and recognition.

Theorists like Paul Ricoeur and Jean-Claude Kaufmann define identity as a process; Ricoeur argues that it is possible to see stable elements in a changing identity, and Kaufmann stresses the ruptures in this process and calls the resulting separate identities “immediate identities”. Their theories give me a theoretical framework for my investigation of Tanning’s identity.