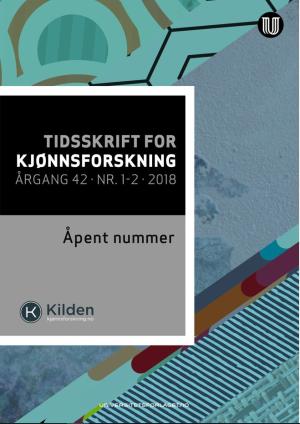 The first issue in 2018 is an open double issue with a total of seven articles. Read new research on the "boy's debate", surrogacy, gender gap in artist's income, history of measures for maternal and infant health care and several articles on gender balance in academia.

Panics about boys, stressed girls – paradoxes and the fragility of knowledge

Are boys the new school losers? This article takes a closer look at three of the main themes in the debate about gender and school: differences in marks in compulsory school, drop-out rates in high school, and gendered transitions to higher education. We examine how gender differences in school and education have emerged over time and what the consequences might be for boys’ and girls’ further education and careers. Different possible explanations of gender differences in school are discussed, including why the debate often tends to become so simplified and polarized. Gender differences in school and education appear to be a result of a complex interaction between what gender means on a psychological and motivational level for the students, how their choices are institutionally and structurally framed, and how both things change over time.

«It became my only option».

In this article I explore Scandinavian gay men’s motivation for having children with the help of a commercial surrogate in India. I argue that commercial surrogacy in India was perceived as an attractive and meaningful alternative in interplay with specific notions of what it means to have an «own» child. I show that «own» in this context is to a limited extent about reproducing own genes, as is often assumed in public debate. Rather, «own» relates to ideas and ideals closely linked to the nuclear family as a cultural norm for procreation, and the exclusive relationship as the ideal framework for having children. Transnational surrogacy as it was practiced in India, with great inequality between the so-called intended parents and the women who contributed eggs and pregnancy, gave men access to women’s reproductive services, and at the same time gave the freedom to define which relationships did and did not arise as a product of the transaction.

Norwegian male artists have generally higher incomes than female artists. There is little evidence of what causes this income gap. The analyses in this article, based on data from a survey of Norwegian artists, indicate that about 50 % of the income inequality between male and female artists can be explained by background variables such as working hours and artistic occupation. Studies of income differences between men and women in other occupations show similar patterns. However, the gendered income gap appears to be significantly larger among artists than in the general working population, even when available relevant background variables are controlled for. The article argues that this gendered income gap can be understood on basis of some peculiarities of artistic occupations, and that the art field may be characterized by a double equality paradox: Despite ideas that talent is independent of social structures (such as gender) and ideals of individual freedom and autonomy are stronger in the artistic professions than in most other occupations, income inequality between men and women in artistic professions appears to be even larger than in the other occupations. Earlier studies of gender inequality in specific art areas can help to understand what might cause the unexplained inequality in income between male and female artists.

It is often claimed that child health clinics were the product of female philanthropy, but investigating both birth control and child health institutions, it becomes obvious that others were engaged in the field, and that the state supported their establishment and running. In addition, the parliament supported institutions for birth control since the late 1930s. There was tension between the radical feminists and working-class women on the one side, and the larger philanthropic women’s organizations on the other, but the 1972 Act on Child Health Clinics brought together institutions for birth control and child health.

A gendered space for academic writing

The social organization of academic writing, seen from the standpoint of female associate professors at the University of Agder, Norway

By May-Linda Magnussen, Rebecca W. B. Lund and Hege B. Wallevik

In this article, we use institutional ethnography to explore the everyday work and research careers of female associate professors at the University of Agder (UiA), Norway, and how these experiences are socially organized and gendered. Our focus is particularly directed at the widespread challenge of finding/making space for academic writing. We show how the «slow careers» of the women are a result of a multitude of socially coordinated «work» (Smith 2005) which can be considered important and «the right thing to do», both for the women, the people around them, for UiA and for society in general. We unpack how gendered ideals used in the local context of UiA are part of trans-local relations. These ideals shape women’s everyday work and academic careers within and beyond UiA. They shape their space for academic writing, but also the necessity of carving out such a space.

The art of balance in music education

The burden of gender. Gendered organizational culture within science

The aim of this article is to explore the organizational culture within science with a gender perspective, as well as to discuss gender equality measures within the academic ideal of meritocracy. The findings focus on these main themes: being in the numerical minority as a woman, gender labeling of research fields (“soft» and «hard»), gender as a deficit (women’s lack of academic self-esteem), and ways in which women handle «stressful» episodes individually. The analysis identifies what I call the «burden of gender» – a gendered structure within the academic culture in which gender as a category overshadows individual competence. «Token female» is a paradoxical category because it indicates a greater consciousness about gender balance – which is a positive thing – but at the same time it «labels» these women as their gender, rather than focusing on their competence. The interviewees in this study are ambivalent towards gender equality measures because they may be seen as unjust by helping women to advance in an ostensibly meritocratic academic system. The meritocratic ideals are valued, and viewed in opposition to measures for gender equality. It is, however, a paradox that gender imbalance is recognized as a problem within science, without questioning whether the ideal of meritocracy is problematic from a gender perspective. This article claims that there are cultural barriers for women in science, and thus the meritocratic system is not always fair in practice. For meritocracy to be fair, gendered patterns need to be made visible – and changed.