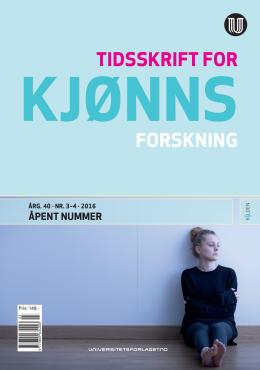 This double issue of the Journal for gender research offers texts concerned with contemporary societal challenges, related to mental health, work, boxing and reconcilliation politics in Norwegian Sápmi. The Journal is in Norwegian.

The missing book, words without meaning and insanely good girls: Knowledge and health

Insanely good girls – how did they get that way? Do they become less «insane» if they are given lessons in mental health at school? The first part examines the origins of the link between good girls and poor mental health, and how it has been legitimized and perpetuated. The second part explores the question of whether increasing the girls’ knowledge of mental health improves their own mental health. The authors have adopted an analytical perspective inspired by French psychoanalysis and phenomenology of the body, and with illustrations from the therapy room. The exploration suggests that the good girls’ use of knowledge about their own ailments in the therapy does not have any real effect on their health. The authors problematize how such effects are related to the limitations of language in the work of knowing oneself. The article then points towards other potential modes of experiencing oneself in the work of health, focusing on bodily movements and physical education.

The disappearance of the full time nurse

Nursing in Norway was a full time women’s profession up to the 1970s. Today, more than fifty percent work part time. This challenges the equal right rhetoric, increases the growing shortage of nurses, sustaining a fear that the future welfare state is threatened. Is part time nursing mainly a question of women’s preferences? Drawing on historical perspectives, this article examines the process of transformation, revealing three interrelated periods. In the first, the postwar period, married nurses left the profession, due to housewife ideologies, normative expectations and restrictive legislations. In the second, closely related to the women’s liberation in the 1970s to the 1980s, more married nurses continued in part time work. Changing ideologies, shortage of child care and problematic working schemes formed their preference. The emerging part time structure was thus regarded as a victory. In the third period, this same structure made the nurses vulnerable to the new governmental and economic order, New Public Management, which was introduced in the mid-1980s, and is now dominant. The new regime has proved to be best served with a high proportion of «flexible» part time workers. The interplay between structure and preferences in different historical contexts, illuminates the present situation.

Sparring with gender. Leadership and meanings of gender among Norwegian boxing coaches

Sport is an important symbolic institution in which meanings of gender are constantly framed, expressed and reproduced. The article is based on a qualitative study of leadership forms among Norwegian boxing coaches (both male and female) and how these are influenced by meanings of gender. Our theoretical point of departure is Beauvoir’s and Bourdieu’s perspectives on how gender as a relation of domination is constructed. The analyses show that male coaches perceived themselves as more autocratic than their female counterparts, while female coaches emphasised a more democratic leadership style. Furthermore, female coaches were often associated with stereotyped femininities such as caring. Both male and female coaches expressed how their gendered bodies influenced their approaches to the athletes and represented limitations as well as possibilities in their coach leadership. The male-dominated culture strongly influenced the way sound leadership was conceived and defined. Thus women’s approaches to coach leadership were seen as complementary and gendered.

Read Women are entering the boxing ring in the newsmagazine

Gender and Indigeneity as Generative Differentiations. Reflections on Reconciliation, Violence and Storytelling in Sápmi

This article attempts to expand possibilities for analysing and responding to the phenomenon of violence in Sámi communities in the light of the stated ambition of the Sámi Parliament to establish a reconciliation commission. The hope is that violent stories of the past retold offer possibility for reconciliation in the present. Endorsing this political ambition, we propose that many stories do indeed need to be told as well as listened to by a Norwegian public, for reconciliation to happen. In addition, we argue that what becomes crucial, is recognition both of Sámi storytelling practices and what gender is. Taken together they need to serve as organizing device.

Mina Loy and the futuristic paradox

Futurism as an artistic movement was deeply affected by the great social and technological changes of the first decades of the twentieth century, and endeavoured to create a new form of art that could express the newly emerging society. The futurists, led by F.T. Marinetti, promoted art based on «masculine» qualities, and associated women with the past, with stagnation and with death. However, the futurist rebellion against tradition became a liberating possibility for women through opening for a re-evaluation of women in society and in art. Women artists such as Mina Loy and Valentine de Saint-Point identified with the futurist demand for innovation, and the futurist movement resulted in radical changes in society as well as in art. The futurist confrontation of bourgeois and moralist values was surprisingly important for women’s liberation and the inclusion of women in artistic production. The futurist aesthetic became a way for some women writers to break with antiquated views on women, and create a new, modern aesthetic that reflected their own experience.

Read The masculine avant-garde that fostered feminism in the newsmagazine.

Anne Stenvold: A history of pregnancy in Christianity. From original sin to contemporary abortion debates. Review by Sissel Undheim