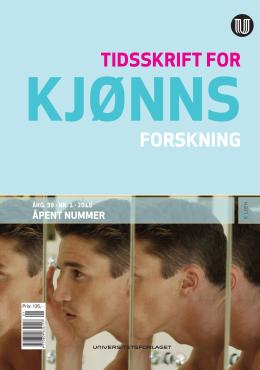 (In Norwegian) This article explores and analyses the social phenomenon of Pick Up Artists. The authors claim that the development of sex as something to be consumed is becoming more central in our identities, and this opens up a marked for self-help and self-realisation in relation to the oposite sex.

This article focuses on so-called Pick Up Artists (PUA) in Norway, and analyses this social phenomenon in the cultural context of the commercialization of sex and a ‘therapeutic ethos’. The transition into the neoliberal late capitalist economy has created structural changes in the ideals of and strains upon selfhood, and consequently how we define and understand the sexual subject. We question whether the self-help literature and commercialized products connected to Pick Up Artists are cultural symptoms of this subjective turn towards a sexual ‘enterprising self’, and ask whether this phenomenon can give some indications of how sexuality is expressed in a contemporary consumer-based society.

(In Norwegian) This article address seventeenth-century devotional books explicitly directed at widows. The author explores to what extent these books qualify as early occurences of ‘womens litterature’ and if there in fact was a readership demanding books on widowhood in the seventeenth century.

Booksellers and printers in seventeenth-century Denmark–Norway seem to have identified widows as a specific target group for devotional books. Nine titles explicitly directed at widows have been preserved. In this article I address the said titles with respect to two questions. The first concerns ideology: To what extent may these books qualify as early occurrences of ‘women’s literature’? The second concerns the book trade: Was there in fact a readership demanding books on widowhood in the seventeenth century? Books by, for and about widows, I argue, certainly reflect patriarchal values no less than other devotional literature does. Contrary to common opinion, the widow readership may be considered the result of an ideological push, not an economic pull.

(In Danish) The article explores how narratives on honour violence in Denmark is constituted, and how accounts on virginity with themes such as violence, gender, culture, ethnicity and Islam are constituted at the individual, social, historical and cultural levels.

In Denmark as in the rest of Scandinavia the notion of honour violence is often used to designate violence which (some) ethnic minority women are being subjected to as an implied contrast to violence which ethnic majority women are exposed to. The categorization of the violence – and of the women – takes place in society at large, both within the media and within popular publication discourse. In addition, the categorization in Denmark also occurs within Danish civil society, e.g. in the Youth Safehouse for Young People in Honour Conflicts (R.E.D.). The categorization in question came to my attention during research for my thesis on narratives about honour violence in Denmark which led me to interview thirteen women living in R.E.D. Following a narrative analysis of an interview with the R.E.D.-resident Manar, the article explores how one instance of narratives on honour violence in Denmark is constituted, and how accounts on virginity with themes such as violence, gender, culture, ethnicity and Islam are constituted at the individual, social, historical and cultural levels.

(In Norwegian) This article analyses former Prime Minister Gro Harlem Brundtland’s rise to political power with point of departure in a quote attributing her entry into politics to coincidence, chance and misunderstandings. The author claims that this form of description does not give credit to her commitment, work capacity or ability to position herself in ways who made her hard to ignore.

In this article former Prime Minister Gro Harlem Brundtland’s rise to political power is analysed with reference to a typology of three roads (with a ‘substitute’, an ‘insider’ and an ‘outsider’ track) and two metaphors (‘the glass ceiling’ and ‘the labyrinth’). The point of departure is a famous quote describing her entry into Norwegian politics as a result of coincidence, chance and misunderstandings. I explain why the quote is in some ways perfectly right – and quite wrong. Certainly there were elements of luck in Brundtland’s political career. But this form of description does not give credit to her commitment, work capacity and ability to position herself in ways that made it impossible to ignore her when crises hit. I also claim that the quote underestimates the role of her politicized family. A combined model consisting of elements from the mentioned tracks and metaphors is developed in order to analyse the early career of Brundtland.