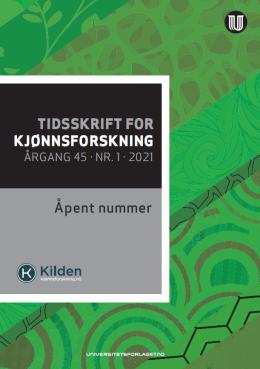 The first issue in 2021 is an open issue. Read about the gendered coverage of two football teams in Norwegian media, wage differences between women and men in the private sector, and how video games that challenge gender norms can bring forward ethical reflections on the politics of violence. You can also read about the political situation i Denmark regarding "identity politics", activism and academic freedom.

This article examines gendered coverage of two football teams in print media in the southern part of Norway. The article draws on a content analysis of two regional newspapers, Fædrelandsvennen and Agderposten, and their coverage of Amazon Grimstad (a women’s team) and FK Jerv (a men’s team). The coverage is gendered and asymmetrical in several areas. The men’s team is portrayed as a team with good players, good results and as a strong collective of individual players, while the women’s team coverage is devoid of such characteristics. Instead, reporting on the women’s football team is focused on financial problems, sponsorship quarrels and poor results. Informed by concepts from cultural and gender theory, the analysis shows how the media coverage contributes to elevate men’s football and trivialize women’s football.

The Gender Pay Gap – What Role Does the Firm Play?

Father Figures, Queer Daughters, and the Dynamics of Violence in The Last of Us: Part II

This article offers an interpretation of Naughty Dog’s shooter game The Last of Us: Part II (2020). Taking Judith Butler’s critique of war discourses as a point of departure, I show how the game recalibrates gender norms, undermines conventions of the shooter genre, and invites critical scrutiny of violence and escalation. I show how the game unveils the destructive dynamics of violence and introduces queer and trans characters as a natural part of the game world, thereby issuing an inclusive and progressive political message.

The Fight against «Identity Politics» and the Attack on the Freedom of Research: Report from Denmark

This commentary discusses the recent attempts by leading politicians and public media figures in Denmark to delegitimize critical studies of gender, racism, and colonialism in Danish Higher Education. By analyzing the rhetorical strategies, political rationalities, and mediatized conditions that undergird the political narrative of how an «anti-liberal», «extremist» and «hateful» form of «identity politics» has taken hold in Danish academia, the commentary argues for the importance of understanding the scapegoating of critical scholarship as part of a growing political threat to freedom of research, represented for instance in the increasing foothold of the transnational «anti-gender» movement.